First off, I cannot speak highly enough of how well it works. Due to not getting around to installing extra Ethernet ports in my living room, I have only one port which gets used by the Plex Home Theatre PC so the Xbox One right now is wireless on my 802.11n network. I tested the streaming in a number of different scenarios including laptop and Xbox One both wireless connected to the same access point, laptop and Xbox One both wireless but with the laptop in a different part of the house on a different access point and also the Xbox One wireless with the laptop connected to a switch port.

In all scenarios, it worked flawlessly and using the little menu button in the toolbar on the app, you can bring up a bandwidth meter which appears in the bottom left corner of the stream. Over wireless I’ve seen it streaming up to about 6Mbps although I haven’t been watching this extensively so it could be going even higher. Right now I’m playing Assassin’s Creed IV Black Flag which was free on Games on Gold this month in July and even a fast paced high motion game like Assassin’s Creed, I’m not seeing any negative effects compared to being locally on the console in terms of input controls.

Currently, the only way to use the Xbox One controller is via a Micro USB cable. Microsoft do have an adapter in the works but there is no news on when this is going to ship right now. When the adapter does ship it means you will be able to connect your controller wirelessly to your Windows 10 PC however I personally don’t like the physical look of this adapter based on the images released thus far as it looks pretty darn big and I would have much preferred to see something a bit more sleek and minimalist like the nano receivers we see for mice and keyboards.

The problem with the current scenario and the future one though is that it all hinges on having a USB port available. One of the great potentials with the Xbox One streaming in Windows 10 was the ability to use a low-end specification, cheap and cheerful Windows 10 tablet like a HP Stream (for example) and play your Xbox anywhere in the house however the requirement for a USB port means that actually a lot of tablets are out of favour because they are too thin to incorporate a USB port into their design. I’m really hoping that Microsoft come up with a solution to this – perhaps a Bluetooth to Xbox One controller bridge as most of these small tablets have Bluetooth so it’s an ideal protocol to use and has no physical port requirements on the tablet then. 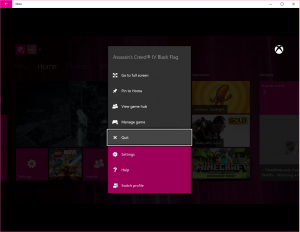 I have found one flaw with the experience I should point out. It’s only a minor thing and truth be told, I’m not even sure this is a console related issue which is why I didn’t mention it above but a game specific issue. If I am playing the game on the console locally and then I later come back to it with my USB connected controller and streaming, the controller operates the console no problems, the start screen and menus however the game, Assassin’s Creed IV Black Flag doesn’t acknowledge that a controller is connected and sticks at the reconnect a controller page. This is obviously something to do with switching between a local controller and a streaming attached controller mid-session.

To work around the problem, hit the Xbox button on the controller to return to the home screen. With the large game tile selected, press the menu button on the controller, the button with the hamburger menu three lines just above the right thumb stick and select the Quit option from the menu. This completely closes the game or app that is active. After doing this, I can re-launch the game and the controller is detected no problems.

The Xbox One gives you the option to download quite a few games as digital downloads, sparing you the time and effort to order games from online or high street retailers, waiting for Royal Mail to deliver them or going into the high street to collect them, but just because you get the option to use your internet bandwidth to download them, doesn’t mean it’s going to be cheaper.

The wife decided today that she wanted Just Dance 2014 so headed into the Xbox One store and made the purchase without even looking at the prices. The game was £39.99 from the Xbox One store as a digital download, so remember you don’t get a physical media for that price.

A quick check on Amazon reveals that you can get the same game, but this time with a physical media disk for £24.99 or on Play for £32.23. With that Amazon price, you save £15 and you get the physical media in exchange for a one to two day wait for the goods to be delivered.

Next time you think about buying something from the Xbox One store, bear this in mind. Convenience comes at a cost.