I noticed in the testing that the Windows 7 images I had created worked just fine but my Windows 8.1 images kept failing at the Apply Operating System step. The package would be downloaded okay from the Distribution Point but would hang for quite some time after downloading it and fail to start applying the image to the disk. The error code in the smsts.log was 80070002 and the message for the code was The system cannot find the file specified. (Error: 80070002; Source: Windows).

I started searching online to see if anyone had produced a list of known bad updates as having to identify manually which of the 92 updates being applied during the reference image creation process would be a pain. Luckily, Microsoft have a support article for just this at https://support.microsoft.com/en-us/kb/2894518. After reviewing the articles referenced on this page, it turned out that one of these updates was approved in one of my Software Update Groups and downloaded to one of my Deployment Packages. I unapproved and deleted the update and refreshed the package on the Distribution Points to flush it out.

My Windows 8.1 build and capture task sequences are running again as I type, fingers crossed this time working in the main deployment after capture.

UPDATE: Confirmed that removing the KBs referenced in the support article resolved the issue and here’s a screenshot just for proof. I will have loads of posts coming soon how this task sequence is built including sample files. 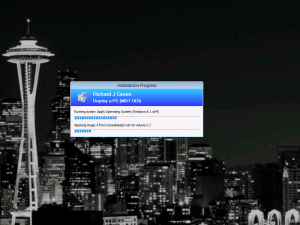