Recently, in my post Storage Spaces You’re My Favourite, I promised to show the world some real life data on how much you can actually save in storage consumption with Windows Server 2012 deduplication, and here it is.

Recently, in my post entitled Storage Spaces You’re My Favourite, I promised to show the world some real life data on how much you can actually save in storage consumption with Windows Server 2012 deduplication, and here it is. 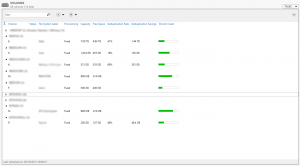 This screenshot was taken from a production file server cluster running Windows Server 2012 using SAN attached fibre storage. As you can see from the image, I’ve obscuficated the names of the drives and shares but left the good stuff visible, the savings.

The data is broken across a number of volumes, some of switch aren’t doing deduplication (the cluster Quorum or the DFS Namespace for example) but those that are, are showcasing some impressive numbers. Data is broken across a number of volumes because we had to keep it this way to maintain a few legacy elements and also to keep some of the more confidential data structures separate in the event of someone getting a bit too liberal with the ACLs on the more generic volumes.

As you can see from the screenshot though, on our main storage volume, the E: drive, we are currently saving 1.44TB which is 41% of the total storage of that volume, 48% on one of the smaller volumes and 69% on another. All of these savings added together means that are net savings are 1.96TB compared with the previous Windows Server 2003 based file server solution. We aren’t storing less data, we aren’t telling users to change how they store or compress their data or making any changes to the way anybody does their job. All of this is being achieved just by enabling a feature in Windows Server 2012, a feature that is available in Standard edition may I hasten to add.

If I was a financially oriented man, I’d probably want to know what this actually means in monetary terms? On a previous project, we calculated that roughly speaking, our internal storage costs are in the region of £2.50 per gigabyte per annum. This £2.50 bakes in the cost of our underlying storage array hardware, supporting fibre channel network and the cost of disks and all. Based on this £2.50 per gigabyte, the deduplication feature in Windows Server 2012 is therefore saving us around £5,000 a year.

If it wasn’t due to the fact that we keep some of this data logically separated in different volumes then we probably could see an uplift on these savings. With deduplication, less is more and by this I mean volumes. The less volumes you have, the more you will save. This is because deduplication is done at a volume level. Minimising the number of volumes you have and consolidating your data into larger volumes will increase the return from deduplication.