Last night I spent about two hours working on Nicky’s laptop which she had somehow managed to get infected with a virus or multiple viruses should I say. I tried loads of things to correct the wake of problems caused by it, however I was having a hard time so I contemplated using my investment […]

Last night I spent about two hours working on Nicky’s laptop which she had somehow managed to get infected with a virus or multiple viruses should I say.

I tried loads of things to correct the wake of problems caused by it, however I was having a hard time so I contemplated using my investment in Windows Home Server and flexing it’s Recovery CD for fighting crime (or virus).

I didn’t have to run the backup in the end as I managed to fix the problem, but the point needs to be addressed of just how wife friendly Windows Home Server actually is, and let’s face it: If your a geek / tech-head with any interest in things like Home Servers, Media Centres and the like you know that it has to be wife friendly or you will never get budgetary approval 🙂

Windows Home Server gives you a client connector to install on each of your home computers (I’ve installed the connector on my work notebook also). Once installed you get the option to configure that computer for backup.

Windows Home Server produces System Image backups, which the type of backup you can use to restore not just the data from a PC but the entire system state Ã¢â‚¬â€œ Byte by byte. On top of these System Image backups it incrementally backs up the files you produce.

For wired (Ethernet) clients the Home Server can wake the computer from sleep or hibernate power states to complete the backup and then return it to that state once it’s complete. For wireless clients this doesn’t work because WoL (Wake-on-LAN) technologies do not work over wireless (as such). In our case, Nicky uses her laptop most days so backup isn’t an issue.

Wife Approval Rating: High Ã¢â‚¬â€œ All your family pictures, video and all her precious documents and email are protected without having to lift a finger and remember to do it. Just make sure if your using wireless clients to setup the backup hours to match the powered on hours of the laptop.

Be it a total virus overload, failed hard disk or whatever, Windows Home Server can help you here. Replace the failed hardware and grab a network cable.

Using the image level backups, Windows Home Server provides you with a date picker and you can choose the date to restore your PC to. All your documents, settings and everything will be restored to it’s exact setup as before.

Wife Approval Rating: High Ã¢â‚¬â€œ Her PC will look exactly the same way it did yesterday, last week, last month Ã¢â‚¬â€œ Whenever. No complaints about lost files, things in the wrong place,Ã‚Â  or things not working how they did before.

We’ve all done it: Accidently deleted a file here or a folder there, whether you thought it was empty or merely a slip of the finger. What’s worse is when you forget to restore it there and then either you or someone else empty the Recycle Bin without checking the contents first (I’ve defiantly done this one).

With conventional System Image backup technologies you can restore the whole image or you can’t restore, it’s as simple as that, but Windows Home Server gives you the power to select individual files, folders. This one is a little tricky to explain, so I’m going to show you instead.

In this example, we are going to assume that I somehow managed to delete a directory of pictures from my PC and then it got deleted from Recycle Bin in the same instant.

Step one is to open and login to the Windows Home Server Console:

Once you have the Home Server Console open you will be by default on the Computer and Backup tab which is the place we want to be. Right clicking on the computer which has the missing files will present a list of options regarding the backups include Backup Now, Configure Backups, Remove Computer from the WHS and Turn Off Backups.

The final option not mentioned in View Backups, which is the option we require here. 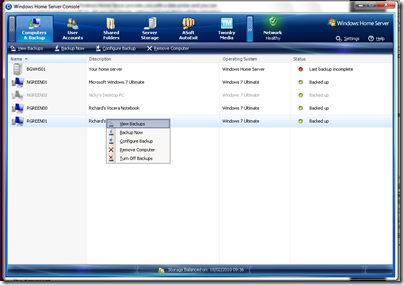 From the view backups screen (shown below) you can view a list of the backup jobs performed against that target computer and the results will be shown. The computer in this example is my personal desktop which is connected via Ethernet which means Home Server is able to wake the computer from Sleep during the day to perform the backup jobs and hence why it completes every day without fail. 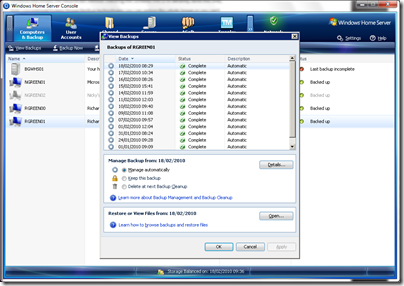 In this example, I am going to assume that my files went missing at some point this morning, so I shall select the backup file from 08:29 today. Once selected, I can hit the Open button at the bottom.

Doing so on a Vista or Windows 7 machine with UAC enabled (like mine) will generate a UAC alert which you would allow. 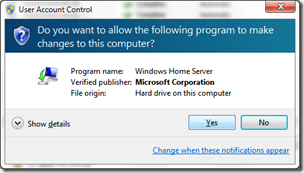 Once past the UAC alert, you will see Home Server starting to open the backup file. Backups in Windows Home Server are incremental so files are only backed up each day if they are changed (common examples are Outlook PST files). My backup from today is very small as no files have changed on this PC besides a couple of documents.

During the process, Windows Home Server will attempt to mount a drive on your computer, and doing so will install a system device driver. On Windows 7, I received this alert about installing the driver, so I selected Install to allow it to proceed.

Once complete, a window will appear displaying the name of the hard disk from your backup however the drive letter will display as Z. This is because Windows Home Server has mounted that backup to a drive on your current computer. The directory structure shown simulates that on the target computer. 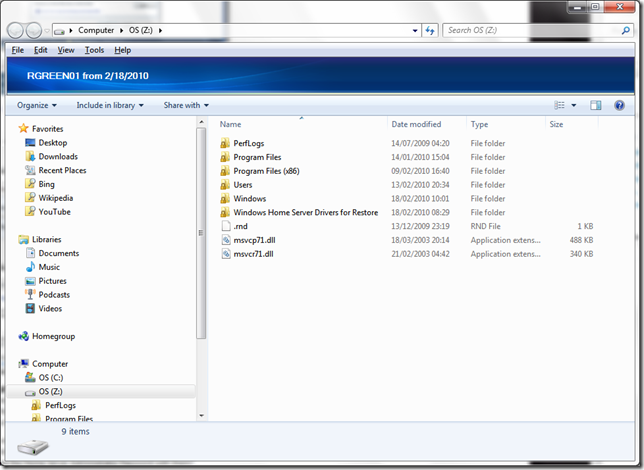 After browsing the directory structure to Users > richard.green (my username) > My Pictures and the directory name, I can see the photos I lost have been backed up. From here I can copy these pictures to the clipboard and then paste them to another location, copy them using Windows Explorer and generally work with them like regular files. 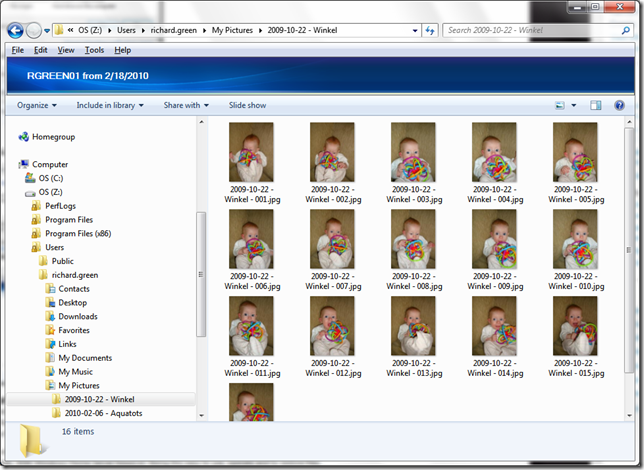 With technology being this easy, it’s plain to see that the potential of the backup technologies in Windows Home Server are outstanding and that it achieves very high wife approval rating as well as making the features easily accessible and easy to use, which introduces a problem.

Normally, wives will just ignore your technology and use it if they have to as it strays in the path of their life or the kids. With Windows Home Server however: Being this easy to use, operate and to restore files, do you share the Home Server Administrator Password with them?