When I updated my PC sometime ago from Windows 8 to Windows 8.1, I encountered an issue where the SkyDrive app and all of the operating system SkyDrive integration ceased to work. It took me quite some time to get to the bottom of it, but the issue stems from the fact that I use a roaming profile, stored on my Windows Server 2012 Essentials R2 server to allow me to get a consistent experience across my home devices.

The cause of the issue was a multiple factor one but it stems from the fact that the SkyDrive app in Windows 8.1 makes assumptions about the current configuration of your PC rather than provisioning everything properly. If you’ve got issues with the SkyDrive app or integration, check the following steps and hopefully this will resolve your issues too.

Before doing anything else, we need to force the SkyDrive app to close. Right-click the taskbar and select Task Manager. In the running application list in Task Manager, if SkyDrive is shown, right-click it and select the End Task option to forcibly close it completely.

If you are using group policy to control your roaming profiles then this is the first place to check. I have been making useof the Exclude directories in roaming profile User Policy setting to prevent large folders which I’m happy to remain only on my primary computer from roaming onto my other secondary devices.

I use this policy setting to exclude the Downloads, Music, Videos and Pictures directories from roaming into the profile. The reason for this is that I also do not use Folder Redirection for these folders. As the folders are not redirected, Windows will try to by default include them in the roaming profile and with ~30GB of family pictures, that would make for one seriously large profile. Specify multiple folders in this setting by separating them with a semi-colon. I’ve also added the legacy Windows XP folder names here for backward compatibility.

When you use the SkyDrive app in Windows 8.1, it creates a folder in your profile called SkyDrive. This folder will by default attempt to become part of your roaming profile which we obviously don’t want to happen. I’ve also added the folder Dropbox to this exclusion in the event that anyone else in my household tries to use Dropbox and to save their profile from the pain.

My Exclude directories in roaming profile setting is now “Downloads;My Music;Music;My Pictures;Pictures;My Videos;Videos;Dropbox;Skydrive” but your values for this may well vary.

The SkyDrive app uses a registry key to determine the folder in use for syncing and this value needs to be correct otherwise nothing will ever sync. Open regedit and browse to HKEY_CURRENT_USERSOFTWAREMicrosoftSkyDrive. Here you will find a REG_SZ string value called UserFolder. The path here should match the folder path to your user profile. You can cross check this either by browsing the %SystemDrive%Users path or to the %UserProfile% path.

Set the SkyDrive App Attribute in the Registry

This, the final part is actually the most pivotal. The SkyDrive app requires the presence of a registry key to function but the team at Microsoft who made the app didn’t think that someone might be logging onto the PC with a profile built from a previous version of Windows and therefore the required key wouldn’t exist. Ideally the app should check and if this key doesn’t exist, it should create it itself.

Open regedit and browse to HKEY_CURRENT_USERSOFTWAREMicrosoftWindowsCurrentVersionExplorerCLSID{8E74D236-7F35-4720-B138-1FED0B85EA75}ShellFolder. In this key, right-click in the main area and select New followed by DWORD (32-bit) Value. 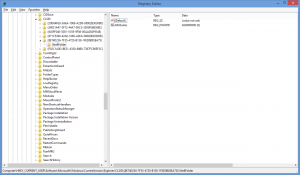 Once you’ve done all the above, launch the SkyDrive app from the Start screen in Windows 8.1. If you have a lot of files in SkyDrive, you will need to be pretty patient and even if you only have a handful of files, still don’t be too impatient as the app is essentially provisioning for the first time now. After a short delay, you should see all your files and folders appear. Using Windows Explorer at the desktop, you will also now see your SkyDrive files start to sync into the %UserProfile%SkyDrive folder. 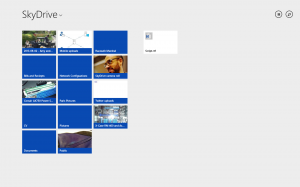 Today, Microsoft released its latest revision to the Windows Live SkyDrive file hosting and sharing platform. As a result of the change, the user storage limits have been reduced from 25GB to 7GB. If you have an existing Windows Live ID, then as a loyalty reward, you can get a free upgrade to 25GB, allowing you to keep your existing storage limit.

To do this, simply login to SkyDrive at http://skydrive.live.com, login as normal and select the Upgrade banner near the top of page. Hurry though as this is being reported as a limited time offer.

Personally, not a lot in a nutshell.

This post comes off the back of the announcement today from Microsoft of the release of a Windows Live SkyDrive app for Windows Phone 7 and Apple iOS devices. You can read the post for yourself in full from http://windowsteamblog.com/windows_live/b/windowslive/archive/2011/12/13/introducing-skydrive-for-iphone-and-windows-phone.aspx.

For Windows Phone 7, I don’t see the application providing a whole lot that isn’t already available through the Pictures and Office Hubs integrated into Windows Phone. Sure, it does have a few new features that aren’t previously available like the ability to share links to your documents or pictures and gives you the ability to create new folders within your SkyDrive account, but that’s it for the new stuff.

iOS device users get more because they currently have zero SkyDrive integration, but that still doesn’t give you integration, just functionality. For iOS device users, you could say that it does actually give them a lot more than a nothing nutshell, but obviously what I write is focused on Microsoft technologies (in case you didn’t guess from all my previous posts).

For me what would be a serious leap in the usability and resourcefulness of Windows Live SkyDrive would be the consolidation of Windows Live Mesh (previously Windows Live Sync and Microsoft Live Mesh as two separate projects) and SkyDrive, or the release of a SkyDrive desktop client. DropBox and many other online file repository sites have desktop clients allowing you download, upload, sync and use all of your content across your desktops, laptops and mobile devices, however SkyDrive and Mesh are currently flawed.

Consolidating the storage pools in Windows Live Mesh and Windows Live SkyDrive would allow you to sync content between iOS devices, Mac, Windows PC and Windows Phone which would be utterly living the dream. All of this of course is overlooking the additional features of Windows Live Mesh already available today including the ability to sync Internet Explorer favourites and Office Outlook signatures, Office styles and templates and custom dictionaries.

Just imagine for one moment: The ability to sync all of your documents and pictures to all of your devices both desktop, portable and pocket, and have changes to those documents automatically replicated to all your other devices, have your standard email signature available on all your devices to provide you with a truly unified front when sending and responding to email communiquÃƒÂ©, all whilst having your own shorthand, TLAs and words available in the dictionary saving you countless autocorrect issues on your mobile device?

Today wasn’t the greatest day for me in one respect. Unfortunatly I flunked my 70-236 Configuring Exchange Server 2007 exam for the second time, and strangely, with months more Exchange experience under my belt (and I mean that because we’ve faced our share of issues and undertaken our share of mini-projects on infrastructure engineering since my last attempt), and with loads of preperation, I actually scored roughly 75 points lower than my first attempt.

I purchased a three exam pack through Prometric earlier in the year which expires December 31st 2011, so I’ve got to try and get two exams passed before the end of the year still, with MDOP being my next exam and still undecided on the third, but Exchange better look out, as once I’ve done my two remaining in the pack, I’ll be going back for my MCITP for Exchange Server 2007 and 2010.

The concession in all of this is a feeling of self-enlightenment. Tomorrow, my trusty laptop will be going back to the office from home so that I can re-deploy it with SCCM to install my yummy new SSD disk (I would clone the disk, but I have a feeling BitLocker might not accept that too kindly). To make sure I didn’t loose any data, I hooked up my VPN this evening and made sure that all of the data on my laptop was safe and sound on the file servers and work, and then I turned my attention to OneNote.

I’m an avid OneNote user, and will use it over written notes whenever I possibly can. Being a Windows Phone 7 user, I also enjoy the OneNote integration in the phone giving me super access to my personal notes. I quickly realised that through the course of migrating through various working practices at work, I had one notebook in my SharePoint 2010 MySite and another locally on the laptop, and then a third in the Windows Live SkyDrive cloud. I’ve just combined them all into my SharePoint 2010 MySite notebook and I feel great for it.

Unification for the win 🙂

I got an email from Microsoft today announcing that my Office Live Workspaces account is being upgraded for free to build it around Windows Live SkyDrive and Office Web Apps.

Your Microsoft Office Live Workspace beta account is about to become even better. You already know it’s a great way to store and share documents, and soon it will come together with Windows Live SkyDrive to become a great way to view, create, and edit documents from virtually anywhere.

In the coming months, you’ll receive notification when your Office Live Workspace account will be upgraded, along with further details. Until then, there’s no need for you to do anything.

With your SkyDrive account, you’ll get 25 GB of online storage for sharing both documents and photos. Your SkyDrive account is designed to work smoothly with other Windows Live services like Hotmail and Messenger. And you’ll be able to view and edit documents from virtually anywhere* using new Microsoft Office Web Apps.

This is really exciting for people who use Office Live Workspaces and it means you no longer need to be on a PC with Office installed such as an Internet Cafe, and it also means the storage grows and becomes consolidated with documents on SkyDrive Ã¢â‚¬â€œ Excellent.

I’m just hopeful that Live Mesh with integrate with SkyDrive meaning I can have 25GB of Live Mesh / SkyDrive / Office Live Workspace storage instead of three separate spaces.