After I did my Windows Phone 8.1 Official upgrade yesterday to rid me of Windows Phone 8.1 Development Preview and the temporarily blocked upgrade due to issues with BitLocker, I noticed that my keyboard for writing email and SMS text messages was missing the comma button and instead, I had a button labelled ENG.

I’d seen this issue before when I first got my handset from Vodafone and the issue is that the phone ships with both the English (United Kingdom) and English (United States). The ENG button is to allow you to switch between the two languages but it’s a real pain because it moves the comma button to the symbol and numbers sub-keyboard which breaks your flow when typing.

Luckily, it’s easy to fix by removing the English (United States) language from the device in the Settings menu. 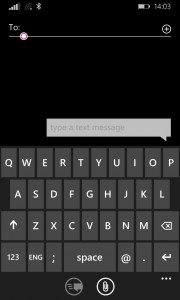 As you can see in the screenshot above, where the comma button normally lives, we have an ENG button instead and this button is used to allow us to switch between the two variants of the English keyboard. We want our comma button back and to do this, we need to remove the English (United States) keyboard. 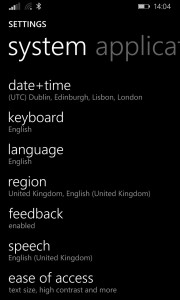 Firstly, open the Settings menu on the phone and then scroll down until you see Languages visible then go into the Languages menu. 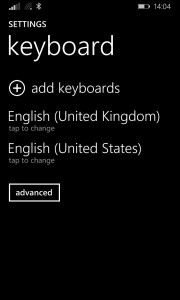 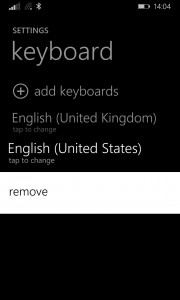 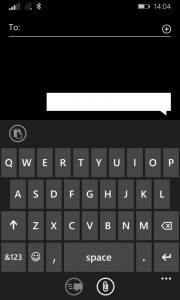 It’s worth pointing out that the keyboard language installed on the phone also determines what domain suffixes are available on the domain button which helps speed up the typing of email addresses and web addresses. If you’re language is set to English (United Kingdom), you will have the option of .com, .co.uk, .org, .gov.uk and .net. A friend of mine who had a Nokia Lumia 820 a year or so ago found that his phone shipped from the UK mobile carrier with the English (United States) language installed so he wasn’t shown the .co.uk domain suffix option.