I’ve been running now for about seven or eight months, and anyone that knows me will say that I’m not someone to rush projects of mine Ã¢â‚¬â€œ I like to make sure I’m prepared and ready for the job ahead. I started running not through personal choice but through encouragement from a friend, Gary Glasscott. […]

I’ve been running now for about seven or eight months, and anyone that knows me will say that I’m not someone to rush projects of mine Ã¢â‚¬â€œ I like to make sure I’m prepared and ready for the job ahead.

I started running not through personal choice but through encouragement from a friend, Gary Glasscott. During 2009, I put on quite a bit of weight reaching the dizzy heights of 15 stone leaving me border-lining a 36 inch waist and feeling constantly unhappy with myself.

Gary suggested I went to try out a free community event called Parkrun with him in the Basingstoke War Memorial Park on Saturday mornings. I figured it was only 5km, so even if I walked it it wouldn’t take any longer than an hour.

My first run was about 45 minutes which was a mixture of jogging and walking to balance the pain, but I made it over the line. More surprisingly, I came back the next week and did it again.

By about week three, I had gone out and bought my first pair of shorts and top as running in a ropey old T-Shirt and some old DIY shorts wasn’t going to cut the grade. Gary also lent me his year old Sauccony Hurricane running shoes as I was running in some Sketchers I brought back from my last trip to America which were less than suitable for running giving me shin splints and more.

As the weeks went by, I found the running getting easier and my times slowly getting faster.

On my fifth run, Gary’s work colleague Nick decided that after finishing his run in about 22 minutes that he would run around again to catch me and drag me to the finish. That week, I finished in 32 minutes which was about 4 minutes faster than my previous best. As I crossed the line, I collapsed to my knees quite literally with the pain, and Gary legged it to the car to fetch me my post-race drink as I was obviously needing it. From that moment on, Nick was to be known as Drill Sergeant Nick in my mind because of the way he shouted at me and threatened to drag me over the line. 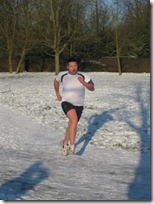 My strongest memory of Parkrun is those events during the sharp winter chill we had during the December of 2009. A lot of the evetns got cancelled due to health and safety requirements placed upon the Parkrun organisers by local councils, however one weekend, the Basingstoke Parkrun went ahead.

On this particular weekend there was about 4 inches on snow on the ground and a lot of people that I would normally recognise as regulars didn’t show up, meaning the number of runners was down from circa 100 to nearly 50. This didn’t stop me though, as I was the only fool to be wearing nothing but shorts and T-Shirt and I was probably one of the only fools to go out and set a personal best on the day.

Gary asked me after finishing the race if my dad is actually Frosty the Snowman due to my love for chilly weather and setting a PB in 4 inches of snow, but I’m pretty sure he’s not, although I’ll agree with the remarks about my love for the cold.

Sadly, I had to stop participating in the Parkrun events in January of this year because of our youngest daughter Layla was to start her Aquatots swimming lessons and the times conflicted. The other two have been doing Aquatots so it was only right that Layla did it to.

It was at this point that my running really took off.

I was determined to keep things going and I wanted to try and move up in the world. Using my lunch breaks at work I started running twice a week but with no way to measure my time or distance, I was just running for fun.

I got a Nike+ Sportband for Christmas from my mum and I used this to good effect, helping me increase my distance week on week and helping me improve my pace and times. To date, I’ve ran 187km with my Nike+, burnt 18,289 kcal, with personal bests of 6min 31sec for 1 mile, 22min 25sec for 5km and 45min 39sec for 10km. The times for my distances are somewhat contested and I will agree they appear to be on the faster side of things, but I’m confident in the calibration of my Nike+.

Since running, I’ve dropped to 14 stone 8 pounds which isn’t much loss I’ll admit, but I feel totally different. If I go out for a walk, I have to hold myself back because my legs try to run, I can play with the kids while were out with far more energy and I feel healthier.

My body looks like it’s two different people attached at the waist. My legs are slim and toned but my stomach is fat like a muffin top, but that said, my 34 inch jean are loose and I’m border-lining dropping to a 32 inch waist, so I feel better for that, however I’m still in the awful category of Large instead of my desired category of Medium.

My longest run to date is 15.5km: I was having a great time doing it, and to my surprise, I started smiling as I crossed the 10km mark without an incline of pain or discomfort and hence I carried on. I felt on top of the world and it was after this run I realised that had I carried on for another 6km, I would have covered the distance of a half marathon, however I couldn’t justify a lunch break 21km long!

On Sunday 30th, I’ll be competing in my first timed and measured 10km in Ropley near Winchester. I entered the girls in the 100m kids fun run too, and a couple of days ago we all got our race numbers through in the post. I’m number 180 for this race.

I’m really looking forward to getting out and running with other people. I’m not worried about competing for time and positions so much because I’ve never been much of a competitor, but more about getting a good run under my belt with a valid time and calculable distance. For me, the biggest part of it is the satisfaction I get from knowing that even though I’m big and heavy and I may not be the most athletic person going, I’m going to be able to say that I did that.

Maybe I’ll write something different after the race because it is a hilly one with the elevation shifting over 50m uphill in the first 3km, but I think I will be ok so long as I stick to what I know 🙂