Office 2010 Technical Preview is the latest version of the Office suite. Currently in Technical Preview and scheduled for a public Beta release in July, some sneaky people have posted some builds of it to a torrent site in particular. Ã‚Â I’m not going to name the site, but most people will be able to work […]

Office 2010 Technical Preview is the latest version of the Office suite. Currently in Technical Preview and scheduled for a public Beta release in July, some sneaky people have posted some builds of it to a torrent site in particular.

Ã‚Â I’m not going to name the site, but most people will be able to work out from the screenshot the site I’m talking about. There are various different torrents for it on the site, however some of them have comments to suggest that there is malicious content included, as described by Microsoft themselves here:

The torrent shown in the screenshot is from a trusted uploader so I was happy that my Hyper-V virtual machine wouldn’t get bricked by it.

The installation process is identical to that of Office 2007, so I hope that the Enterprise deployment techniques have not changed either. There was a lot of confusion and trouble generated with the new deployment process for Office 2007 and people believing it was not possible to do it as a GPO deployment and that you needed SMS or such.

The Microsoft Office Program Files directory is 803 MB on the test system which obviously doesn’t include shared files and dependencies in other places, so lets call it 1 GB. For my 1 GB I get Access, Excel, InfoPath Designer, InfoPath Editor, OneNote, Outlook, PowerPoint, Publisher, SharePoint Workspace and Word along with the tools etc.

I think compared to Office 2007, this actually looks a little bit more compact and when running the applications, they feel more nimble.

I fired up each of the applications, and I have to say that Word, Excel, PowerPoint and all of the extra programs (Access, InfoPath and Publisher) don’t really seem to have changed to any notable degree, although I have only been playing with this for about 10mins.

The biggest changes seem to be to Outlook and with a focus on improving the team communication and helping people become more efficient with their mailboxes.

There is two things I’ve noticed with OneNote so far.

The first is the most obvious is that OneNote now has the Ribbon Ã¢â‚¬â€œ Thank you so much Office team. I love OneNote and I use it very often, but it’s lacked the Ribbon and has felt dethatched from the 2007 suite as a result.

Second, is the concept of authoring in OneNote. 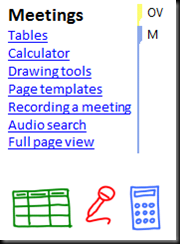 This is a snippet of the sample notes pages that come with OneNote 2010. In the right of the snippet, the blue and yellow lines with the initials are the authors.

So in this case, OV made the title, whilst M made the hyperlink list. This is great because it means over time you can track who did what with a OneNote.

Whilst the Outlook UI as a whole hasn’t changed too much, there are some great little pieces here. 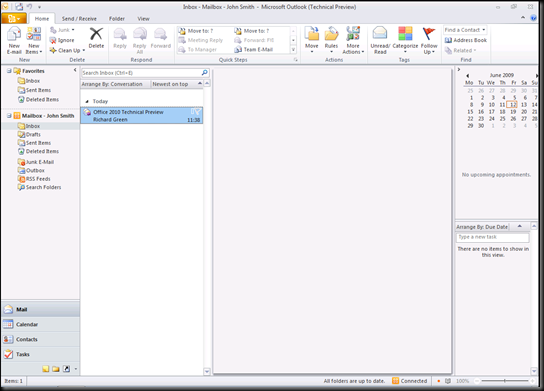 The Ribbon has been updated with some new links and features, which I will focus on a little bit further down. The navigation bar on the left hasn’t been touched by the looks of things. The reading preview on the right is the same as in Outlook 2007 and the calendar and tasks on the right are the same also.

One thing I did notice but don’t like is the way that the current view item in the To Do bar on the right is aligned to the right hand edge. In Outlook 2007 is floats in the middle which looks much nicer, but perhaps this is a bug in the early build.

Tracking conversations in Outlook is something I have started doing recently, but Outlook 2010 makes this totally different. When you expand an email that’s in a folder, in-line Outlook shows you all of the related messages in that thread from all of the folders in your mailbox including your Sent Items. This means you can track the whole conversation very easily.

Next up is the Clean Up item in the Ribbon. This is another thing I have recently picked up as an Outlook habit and this will make it 100 times easier, and Exchange and Storage Administrators will love this feature.

So you send an email, someone replies and the thread grows to about 10-20 messages. In a normal mailbox you have all of those messages from the first reply down to the last reply. The trouble is that each reply contains all the previous replies so you are heavily duplicating items in your mailbox, slowing down the client with multiple copies of emails to manage, filter and search etc. Additionally, the Exchange server needs to look after all these items in your mailbox and they need to be stored on disk somewhere.

Using the Clean Up tool will remove any copies of the message further down the thread which are already included in a more recent version.

To give you an insight into this idea of keeping only the most recent version of a thread (unless of course someone replies off-thread in which case you have to keep multiple), I was able to delete about 6,000 messages from my mailbox as a saving of 200 MB. So for an Enterprise with 100 users, if you multiply the 200 MB by 100, that’s 2 GB. 2 GB of data you don’t need to store any more on the Exchange Server!

The last thing I’m going to touch in my first look at Office 2010 is the Quick Steps. Akin to the QuickParts in Word 2007, these are actions you perform frequently and this will probably really help a lot of people. All of these items can be customised, taken away from and added to with your own items also.

By default you get links for Forward the message and add FYI to the subject. Quick FYI messages are commonplace in business so to remove the need to actually type FYI each time and just be able to forward the message more quickly gets the information out faster and also saves your keyboard wear and tear.

By favourites are Forward to Manager and Email Team though. In my current role at Vocera, team emails are frequent. You can configure what these links do as I said, but the greatest thing of all is that by default it gets the recipient data for these buttons from Active Directory by reading the Manager field and then reading the Direct Reports and cross-references to that Manager.